Today we’d like to introduce you to Liam, a unique and wonderful individual! Liam is a vivid storyteller and has an imagination that is out of this world! If you give him Lego, he will create magical lands from afar full of detailed stories. When he’s not dreaming up and creating stories, he enjoys spending time with his family including his Aunt and Uncle on their farm, and playing games with his friends on his Xbox and computer, especially Fortnite and Minecraft!

Liam has had a long road of finding the best way to manage the world around him. He lives with disabilities that make it difficult processing high sensory situations, and as much as he loves people, he doesn’t always understand them. While Liam longs for independence, his anxiety can get in the way.

When Liam started out with AdaptAbilities, he attended the McKernan Weekend Respite Program. During his time in the program, he started to build more confidence and independence. Through his newfound independence, Liam signed up for AdaptAbilities’ In- Home Program, as it presented him the opportunity to work towards new personal development goals. 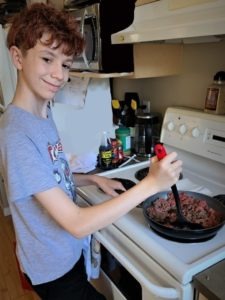 Liam has been working one-on-one with his Community Specialist support worker, Samantha, who has been an incredible and positive influence on him as noticed by his parents. With her support, Liam has been able to overcome personal care struggles and has been able to learn new life skills such as cooking. At first Liam was nervous to use the stove, but is now more at ease to whip up new dishes that tap into his creative side!

Liam is in an environment where he is comfortable entering into new social situations and has become more assertive in advocating for his wants and needs. Through Samantha’s encouragement, he has started taking the initiative to learn more and see all the possibilities that the world has to offer him!